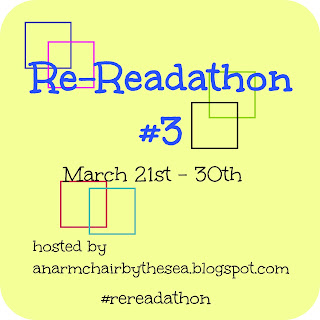 I'm so happy Bex at An Armchair By The Sea is hosting another re-readathon- I really enjoyed the last two. I've had a bit of a hectic start to the month so I'm looking forward to getting stuck into some old favourites :)

So here's my provisional to-read pile! 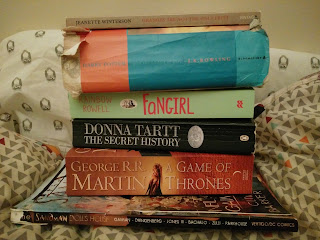 First up we have Oranges are Not the Only Fruit by Jeanette Winterson, which is long overdue for a re-read- I think it's been five years? Re-reading her wonderful memoir Why Be Happy When You Could Be Normal? recently has reminded me of what a travesty this situation is. So, definitely want to get to this one.

Next priority is Harry Potter and the Goblet of Fire, because I started re-reading the series a while back (I think it was actually during one of these re-readathons) and I've sort of stalled on it. Plus it's Goblet of Fire and we all know it's one of the best in the series.

Fangirl by Rainbow Rowell-  I loved this book and was hoping to re-read it soon anyway, but I recently read Carry On- set in the fictional fantasy universe Fangirl's main character writes fanfiction for- and that's just made me want to read it even more.

The Secret History by Donna Tartt- I've been meaning to re-read this for ages, and I even shortlisted it for the last re-readathon- but I just haven't got around to it. It's one of those books I think will be interesting on a re-read- knowing about the characters what I do now and all that. That's as much as I can say without spoiling it for anyone who hasn't read it yet!

A Game of Thrones by George R R Martin- I recently started re-watching the TV series and it's really made me want to go back to the books- I've already read them twice but there's so much in them you really do need to read them a few times. I wasn't planning on re-reading them until we had a release date for The Winds of Winter, the sixth book in the series, so that I had a nice new one to read at the end of it- but it seems that could be a while away yet, and I can't wait. I'm not totally sure if I'll read this during the re-readathon- if I do it'll probably take up the whole time- but I might make a start on it, at least.

Sandman: Doll's House by Neil Gaiman- I started re-reading the Sandman series during one of the other re-readathons... and promptly forgot about them. This was actually the first one in the series I ever read, so I'm quite fond of it for that reason. Also, graphic novels are great for boosting your page count ;)

So that's my current book pile! Of course it could all change with bits and pieces on my kindle but we'll see what I feel like on Monday. I can't wait!