It's finally here! Bex's Re-Readathon starts tomorrow and I'm super excited. This week is my second last week as an undergraduate and the pressure is seriously on- so it'll be great to escape with some old favourites.

This is my to-read pile: 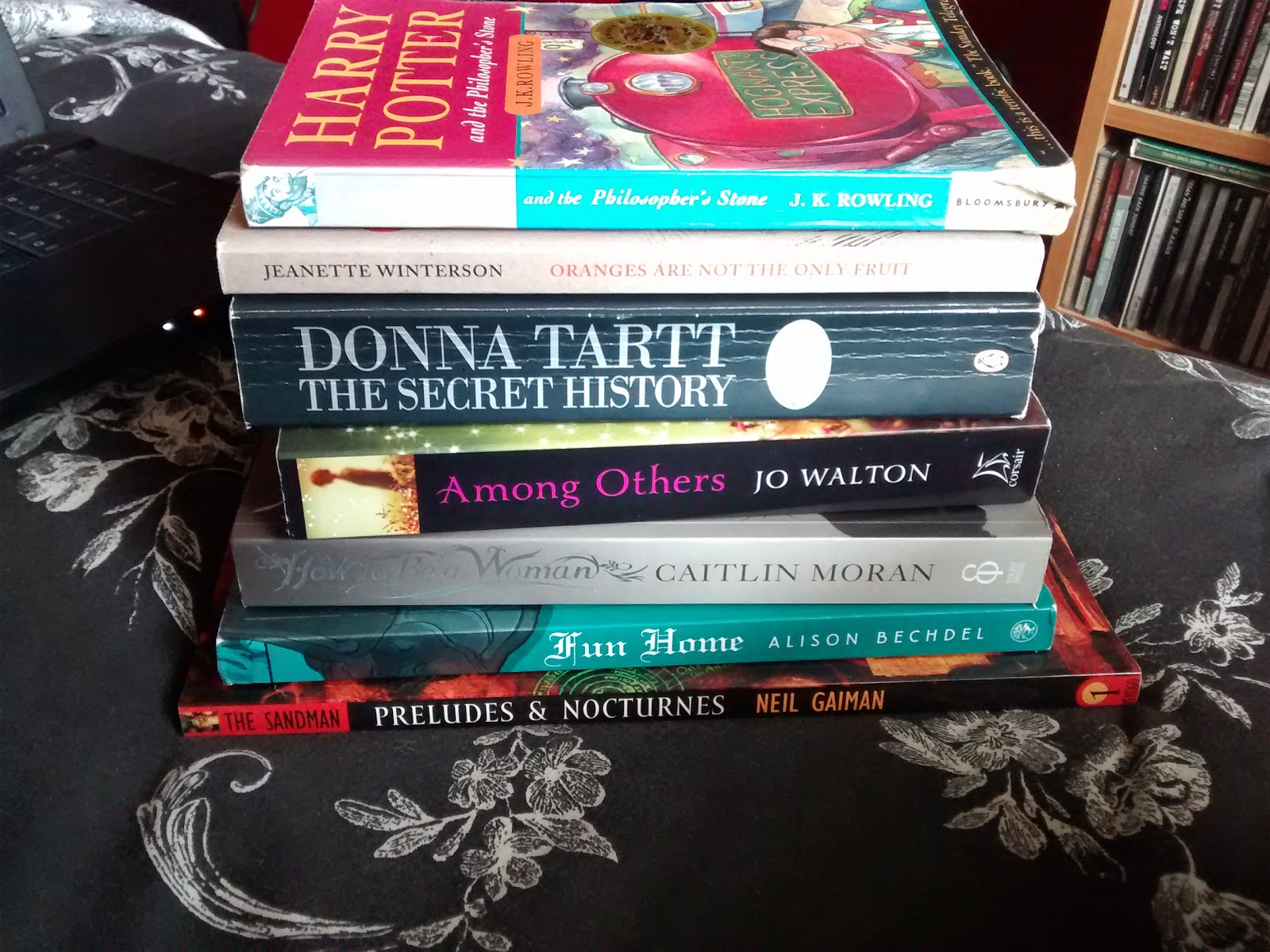 From top to bottom:

Harry Potter and the Philosopher's Stone by J K Rowling:
I don't really need to introduce this, do I? I've read it almost once a year since I was six. I'm surprised I don't have it memorised, to be honest. I've been feeling lately it's time to reread the Harry Potter books once again.

Oranges Are Not The Only Fruit by Jeanette Winterson
I last read this four odd years ago, and remember loving it- but I don't remember much about it! What I do remember is that it's a surprisingly funny, very autobiographical story about a girl growing up in a deeply religious home who discovers her sexuality- and there's a lot of wonder Winterson-y oddness too. I've been meaning to re-read this since I read Why Be Happy When You Could Be Normal?, Winterson's autobiography- which was itself nearly three years ago... So it's long overdue!

The Secret History by Donna Tartt
Last read December 2012. Since I'm nearly at the end of my university life (as an undergrad, at least) I figure I should reread this. It's a scholarly sort of thriller and there's a murder in it, the circumstances of which I can't quite remember.

Among Others by Jo Walton
Some day I may dedicate a whole post to this book- I read it last January and it hit me hard. You know when sometimes the right book comes along at just the right time? I reread it pretty quickly after that, but haven't looked at it since, though the characters and places have been ticking over in my head ever since. It's about a girl at a horrible boarding school in the 1970s, reading lots of science fiction and using books to escape. And there are fairies.

How To Be A Woman by Caitlin Moran
Last read in 2010, this is a sort of memoir/introduction to feminism that had me laughing so much I had to put it away, struggling to keep a straight face, on the train. I read Moran's other two books- the collection of essays Moranthology and her coming of age novel How to Build a Girl- quite recently and they've made me remember how awesome this book was. So I can't wait to read it again!

Fun Home by Alison Bechdel
Sometimes I feel like this book was written just for me, because it ticks so many of my boxes. About books? Check. Lesbians? Check. Coming of age? Check. Lesbians? Check. Dysfunctional family? Check. That said, I'm a bit shaky on remembering exactly what went down in it. Plus it recently got made into a Broadway musical, which is something I definitely need to check out.

Preludes & Nocturnes (The Sandman #1) by Neil Gaiman
I read The Sandman books at a very young age- probably too young, I think I was between eleven and fourteen... thank my older brother for that. I'm always banging on about how good they are but I haven't read the series all the way through since then (and I actually haven't read The Kindly Ones at all- for some reason it was the only one the library didn't have, and graphic novels were prohibitively expensive when I was a teen...) So, yes, I really, really need to fix that.

The Woman in White by Wilkie Collins
I'm kind of torn on this, because I really do want to reread it but it's so long! Like, if I read nothing but this I probably still won't finish it in a week. Oh well, I've added it to the list anyway. This is another book that ticks so many of my personal boxes- Victorian! Family secrets! Mysterious characters! I read it in 2011 so it deserves a reread.

The Magicians by Lev Grossman
It's difficult to know how to describe this book. It tends to get branded 'Harry Potter for grown-ups!' a lot, which is... sort of true, sort of not true. I've also heard it described as if Bret Easton Ellis wrote Harry Potter, which is probably a better description in my mind. Basically, the characters discover that the setting of their childhood favourite books (which is so-totally-not-Narnia) is real and they go to school to learn magic, but to me, it's a lot more about the experience of being an intense fan of fantasy novels than actually being a fantasy novel in itself. Or something. Anyway, I read and loved this and the sequel a while back, and the third book in the trilogy came out recently so I need reread the first two, as I'm a bit sketchy on the details.

Also, it's occurred to me that the books I'm reading for uni at the moment, Persuasion by Jane Austen and Nana by Emile Zola are both rereads, so I can totally count those towards my page total. Huzzah!