Review: The Art of Being Normal by Lisa Williamson 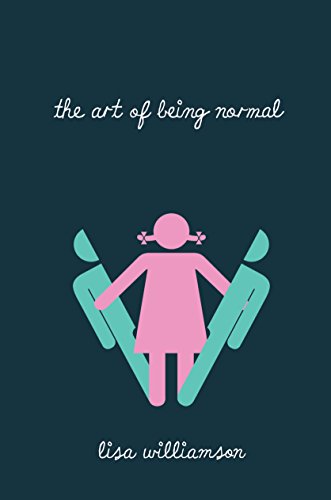 Can I just preface this review by saying that I'm so happy there are so many YA books with trans* characters about at the moment? I was in Waterstones the other day looking for books to spend my Christmas vouchers on (which I still had, for some reason) and I was like oh, look, there's another one. I'm a teeny bit frustrated that they are almost entirely all about trans girls with nary a trans boy to be seen, but I'll let that go for now. I'm happy to see LGBTQ+ fiction expanding in any direction, really.

I picked this up in Tesco a while back super cheap (couldn't resist) but it sort of got swallowed up by my TBR pile until recently, when a friend (who is a trans girl) talked about how she loved it but it took ages to read because it hit just too close to home. So I was intrigued.

The story: David is a closeted trans girl, dodging bullies, longing to express himself, and intrigued by the mysterious new kid Leo. They strike up an unlikely friendship and find they have more in common than they thought.

Sort of spoiler, as apparently it's in the blurb of some editions but not all: Leo turns out to be a trans boy, which was something I liked. Some people have made a deal about how unrealistic it is to have two trans characters at the same school... which, um, no. We are everywhere, I'm afraid, and we tend to band together. Most of my friends from high school came out as gay after we left. I might accuse this book of some lack of realism, but that doesn't count for me. Instead, I think it was a good to get a different perspective and show the range of trans experience that exists- for example, unlike David, Leo's been living as a boy since he was a kid and is currently stealth. His narrative, where he ends up dating a girl who has no idea of his history was interesting.
end spoiler

Really the central focus of this book is David and Leo's friendship and David slowly gaining the courage to be open about who she is. It was something I liked a lot, and while I usually am not a fan of coming out stories (because LGBTQ+ people have other experiences, omg) this was a damn good one, which I'll happily make an exception for. Some people have criticised the ending as a bit too good to be true... and I think I agree with that to a certain extent. But I'm okay with that, because in real life things do often turn out better than you expected and I'm all for a message of optimism.

What really struck me when I was reading this was the depiction of dysphoria, which my friend and I agreed is heartbreakingly realistic. David struggles with her body changing and the part that really got me was when her sister gets her first period, and David realises this is something he can never experience. It's all so spot on I was surprised that the author Lisa Williamson is not trans herself- although she did work in a GIC and has clearly done her research. Bravo for that, because while I think we all agree that trans people writing about trans people is the best scenario (and same with any diverse lit really) I am all for sensitive, well-researched books like this.

So. Totally recommended, especially if you're not familiar with trans things and are into reading more LGBTQ+ books :)