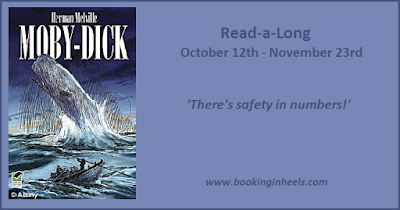 I'm late to the party! I started this post ages ago, but I'm only getting to post it now. Better late than never though, right?

In the time since I started writing this post I've actually read most of the first week's reading... but let's pretend I haven't, sshh.


1. What were you expecting from the novel? Do you have any preconceptions?
I've heard two things: that it's really good, and that it's really boring. So, I'm not really sure what to expect. I've read some of Melville's other stuff (Benito Cereno and Bartleby the Scrivener) and really enjoyed those though, so I'm hoping we'll get on okay.


3. This book, unlike War and Peace isn't a translation? Do you think that will make a difference?
Although the War and Peace read-a-long was before I had a blog, I was reading along at home. Consistency of character names is one thing that comes to mind! Plus, we'll be judging Melville more than any translator. So no room for excuses like, "Well, it probably sounded better in Russian..."


4. Have you read Moby-Dick before? What prompted you to read it now?

I've been considering reading it for some time, but was always scared off by all the reports that it's really dull and full of whaling terminology. I downloaded it in a free Kindle book binge about a week before Hanna put up her poll, so it seemed like fate.

Y'all have such pretty editions, but as I said, mine is just the free Kindle edition. 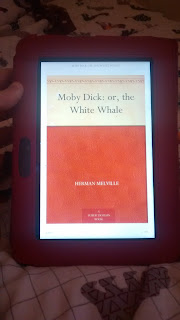 Blah. But, having it on the Kindle is actually a good thing because it lets me look up any obscure nautical/whaling words that will inevitably come up.