What I'm reading now, adventures in tattooing, and some challenges!

Hello! It's been a full two weeks since Bout of Books, so I figured an update was due.

So I started a new job during Bout of Books and I'm settling in pretty well, I think. It's actually quite nice working again- I'm so much more productive when I'm working. When I'm off I tend to just lie about watching reality TV and browsing Reddit, while if I'm at work all day and come home with just a couple of hours before bed I'm far more likely to actually want to play the ukulele or read a decent book. So that's good.

That said, I hardly read anything last week- for two days in a row I read absolutely nothing, and on the third day I managed about 10 pages. That's pretty shameful for me. A day when I read nothing at all just feels wrong.

I did finally finish NOS4R2 though, after reading it for far longer than I should have. Weirdly, that happened to me with Joe Hill's Horns as well, I think I was reading that for about the entirety of October... Overall I liked it, but I think I ruined it for myself slightly by taking so long to read it and having too high expectations after reading so many rave reviews. Still, I'd definitely recommend it if it sounds like your thing.

I've been a bit better about reading in the past few days, though- I've finally been able to give The Blind Assassin the time it deserves as well, and I'm really enjoying it. It's so hard to describe, and not really what I thought it'd be at all. Mostly it's the story of Iris Chase growing up in the Depression which is pretty fascinating, but then you've got extracts from her sister's novel (the 'The Blind Assassin' within the book) which is sort of a fantasy story within a story... it's odd and interesting and I'm looking forward to seeing where it goes.

In an effort to pick myself up out of my recent reading slump, I started rereading Ready Player One which I read and loved a couple of years back. It's still so good- maybe even better than I remember, as I understand more of the references this time around. Also, I'm terrible at remembering plot intricacies so I can't remember how it ends, which is working to my advantage. In case this one slipped your radar, it's set in the future, where a sort of MMORPG called OASIS has essentially usurped society. When the creator of OASIS dies, he leaves his fortune to whomever can solve the puzzles hidden all around the world. Just everything about this book is so good- the world-building, and all the geeky references and the character. I can't put it down.

In other book-related news, I got my first ever tattoo on Tuesday! I mean I'd been totally sure what I wanted for well over four years, but I finally bit the bullet and got it done. 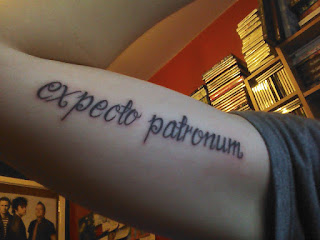 Professor Lupin continued, 'The Patronus is a kind of positive force, a projection of the very things that the Dementor feeds upon - hope, happiness, the desire to survive - but it cannot feel despair, as real humans can, so the Dementors can't hurt it.' Harry Potter and the Prisoner of Azkaban, p. 176

That, tied in with how books have helped me in my darkest times, all basically adds up to words that I'm proud to have on my arm.

There's also various stuff happening on book blogs in the next few weeks, which I'm looking forward to taking part in. First up, Bex at An Armchair by the Sea is doing another re-readathon, this time over two weeks! I had a wonderful time during the last one, but I'll be taking a pretty casual approach to it this time- I've got library books and I want to finish The Blind Assassin, so I'll be rereading just a little on the side. I'm thinking I'll start with Good Omens by Terry Pratchett and Neil Gaiman, and then see how far I can get in the Harry Potter series :) 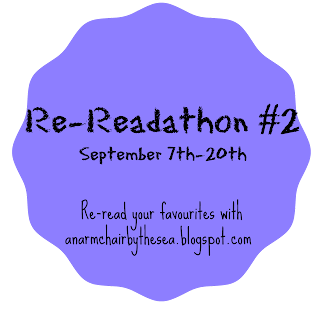 Then there's R.eaders I.mbibing P.eril, aka RIP X, which is an event running between 1st September and 31st October encouraging reading gothic/horror/supernatural/suspense etc books. I'm a big fan of seasonal reading, so I definitely want to take part in this to some extent. The problem is, I don't have a whole lot of things on my shelves that would fit into this category! So we'll see what I can rustle up at the library, if anything.

Also, Alice over at the wonderful Reading Rambo is hosting a read-a-long of Matthew Lewis's The Monk! I study 18th and 19th century literature so I've heard a lot about this book and how influential it has been but I've never actually read it, so, time to change that with my first ever read-a-long! Also, the Amazon summary made me laugh out loud (the devil is disguised as a woman disguised as a monk, wut), so there's that. 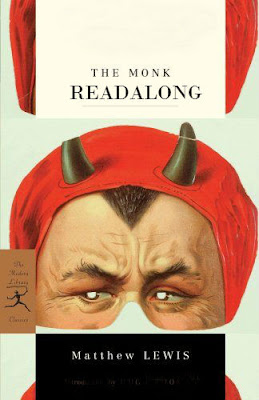 So yeah, that's all my news! I'll be back tomorrow, hopefully, for Bex's Re-Readathon!

Email ThisBlogThis!Share to TwitterShare to FacebookShare to Pinterest
Labels: Monkalong, re-readathon, RIP, this week in books