The Crimson Petal and the White Read-a-Long: Week 1 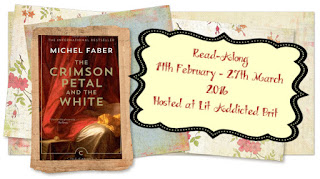 1) We'll start simple. How are you finding the book so far?
I'm loving it! Seriously, I rattled through this week's chapters in a very short space of time and had to fight with myself not to keep going. I love Victorian London. I mean, really love it. And the descriptions are so detailed and evocative I can just lose myself in it like the nerd I am. And then there's the writing style, addressing the reader directly, which could go so wrong but it just works wonderfully.

2) The language and tone of the writing is pretty brutal and unflinching. Does that bother you?Does it change how you feel about doling out recommendations?
Heh, this question just made me remember the time I was in the library and overheard a very elderly lady raving to the staff about how great this book is. The language clearly didn't bother her ;)

But yeah, I had mostly forgotten how... explicit this book this. But, hey, I like explicit. Especially in historical fiction, and especially the Victorian period because so many people think of the Victorians as prudes and they really, really weren't. Really.

3) We've met both Sugar and William Rackham now. First impressions?
Okay, let me disclaim first of all that I have vague memories of hating Rackham from the last time I read this, though I don't remember exactly why. Actually, it may not be for much more than what we've learned about him already, because he does so many infuriating things. Hey, if you don't actually want to inherit your family's perfume business, that's fine! But, you know, you still have to DO something with your life. You know, other than just spend your daddy's money *grumbles* I know, I know, easier said than done and people are complicated and all that, but I'm finding it difficult to have any sympathy for him. And his family life! We don't know much about his and Agnes's marriage but it seems safe to say it was pretty much done for the money and they were never really in love. It still makes me feel bad for Agnes that he has affairs, though. I'd probably stay in bed all the time too if I was married to him.

Sugar is an intriguing one. There's a bit of a mystery about here- she reads so much and so well in a time when many women of her class couldn't read at all. Makes me wonder how she ended up as a prostitute in the first place- and is Mrs Castaway really her mother? (I don't remember!) I think she's very clever and stuck in the wrong time and place, really. I feel sort of bad for her, as much as she seems to be able to make it work for her.

4) Agnes Rackham has been a bit of a fringe character in this first section but her treatment by her husband and doctor makes her quite the tragic figure. What do you think about her mysterious 'illness'?
Mental illness, probably some form of depression, seems to be the most likely scenario. Though that was all tied up in the idea of hysteria and other 'women's problems' back then, so it's all very much the same.

5) Much though I'm really enjoying the book, there doesn't seem to be much in the way of plot. Any predictions about what's coming up?
I think it's fairest if I give this question a skip, since I've read this before, and though I don't remember specifics, I remember certain big things ;)
Posted by Gee at 5:26 PM